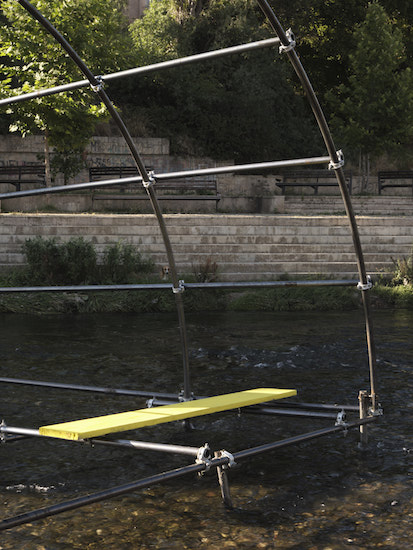 “Never before had anything like this been done in Mitrovica. This bridge is a symbolic place, there is tension there, and we are very grateful to the people who helped us. The object was supposed to be in the middle of the river – on a kind of fluid border. It is rather absurd to cut a river in half, because rivers not only divide, but also connect, and I really wanted to do something unifying for the city in this space.”

Stanislava Pinchuk speaks to Radio Free Europe (Russia) on her large-scale installation, Europe Without Monuments located at Ibar river, Mitrovica, as part of her participation at the 14th edition of Manifesta Biennial.

As she explains: “I noticed when I went [to Mitrovica] to explore that even in the cold months, teenagers sit near the river, and I wanted to do something useful that could change everyday life a little. And it worked out – people use my work. The monument to Bogdanovich is dedicated to the resistance of Serbian and Albanian miners to fascism – this topic is still relevant in Europe today. Then Europe said “never again”, but this statement was not justified, and the fight against fascism continues. My monument is made of scaffolding, which reminds of how Bogdanovich created his monument, covering the frame with concrete and thus forming a utopia, a statement of intent – on behalf of the people who saw it all and did not want fascism to repeat itself in any form.”